Talk about TornadoVM given at Joker<?> 2019 Conference. 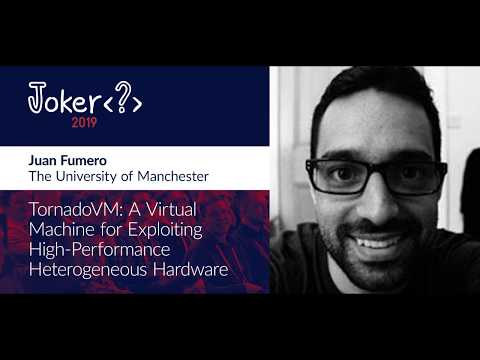 The proliferation of heterogeneous hardware in recent years means that every system we program is likely to include a mix of computing elements; each of these with different hardware characteristics that enable programmers to improve performance while decreasing energy consumption. These new heterogeneous devices include multi-core CPUs, GPUs, and FPGAs. This trend has been followed by changes in software development norms that do not necessarily favor programmers.

In this talk, we present TornadoVM, a plugin for OpenJDK that allows Java programmers to automatically run on Heterogeneous Hardware such as multi-core CPUs, GPUs, and FPGAs. Furthermore, TornadoVM can perform task-migration from one device to another at runtime, entirely transparent for the user. To do so, TornadoVM consists of three software components: 1) A simple API for composing pipelines of existing Java methods. 2) An optimizing JIT compiler that extends the Graal compiler with hardware-aware optimizations that generate OpenCL C code. 3) A runtime system that executes TornadoVM specific bytecodes, performs memory management and schedules the code for execution on GPUs, multi-core CPUs, and FPGAs.

The target audience for this talk is Java programmers that would like to smoothly run programs on GPUs and FPGAs without any knowledge about the underlying hardware details, and complex parallel and heterogeneous programming models.